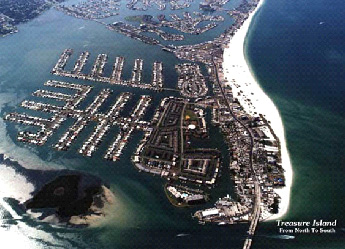 Treasure Island, Florida was first settled by the Timucan Indians around 300 A.D. The Timucan established small communities and traded with other Indian Nations until the arrival of Spaniard Panfilio de Narvaez in 1528. After failing to find the gold he was seeking, de Narvaez left after two weeks leaving behind countless dead and tortured Timucans.

The area slowly became populated by Europeans and their descendants who primarily lived in beach shacks and eeked out a living by fishing and harvesting turtles.

The "Great Gale" of 1848 created John's Pass on the Island's north end and split off two smaller islands which are now the Isle of Palms and Capri Isle.

Around 1900, St. Petersburg experienced a land boom which brought weekend tourist to the beaches. No bridges existed so travelers had to rely on mostly unreliable ferry service. The State began selling the Island at a cost of $1.25 an acre. The first hotel was built on Treasure Island in 1915 and was named the "Coney Island."

To generate interest in the properties being developed a couple of enterprising property owners buried and then "discovered" a couple of wooden chests on the beach. Claiming the chests were filled with "treasure" the news of the discovery spread quickly and people began calling the area Treasure Island. The name stuck.

Treasure Island, Florida is located on Florida's beautiful Gulf Coast and is blessed with miles of gorgeous white sand beaches that boast that "Old Florida" feel yet Treasure Island is part of the Tampa Bay region, one of the nation's fastest growing metro areas. Treasure Island offers you and your family a quiet "laid back" atmosphere while being just a short drive from Florida's major theme parks.